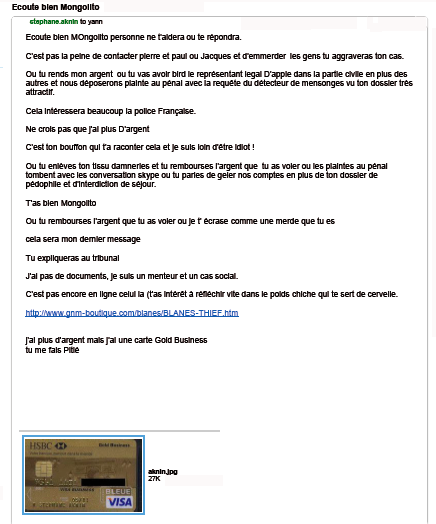 After hesitating a long time to respond to the assertions of a guy who has more need of a psychiatrist as justice.

This article was edited after a edifying phone call , see the note➂ at the bottom of page

I will finally follow the advice of my friends and clients who have heard of this case.

This gentleman contacted us through Mr Stephane Malagrida Stephia Products Company Sarl, claiming to want to purchase our products. After several discussions we quickly became apparent that Mr Aknin was at least very odd to see more. But he kept asking us for product prices, but nothing has ever stopped when we finally meet him until he contacts us to find her Iphones on the open market in Hong Kong. We have clearly told him that it was possible but not simple and we could not guarantee delivery times … he said it was not a problem but he had to act quickly …

As there had weird things: He was paying with a company based in Switzerland (SMPI SA), to be delivered in a company in Belgium (Jean-Paul SOPIMED Goudmant) while his company is based in France (GNM = Net Media Group.SARL), we write a sales contract lawyer (the one and only time in 23 years of business we do that) it has signed and he sent all the money the same day which was rather odd because with our experience in trade is almost the first time we see this ➀ … (we had insisted on full payment having regard to its abnormal behavior) …

A few weeks pass and the gentleman seems more and more nervous, he calls to all Chambers of Commerce in Asia and only god knows who else to ask information about us.

We tell him to calm down and be patient, we have made the necessary contacts and source of iPhone had been thought he just needed time to collect the large amount he wanted a few days when he learned confirmed a start date and sent the transportation bill (which he never paid) has suddenly decided to cancel the order and he request  from us a full refund.

We’ve made clear to him that it was not possible at this stage of proceedings, given that we had committed funds, but he insisted on canceling the order, so we said that as specified in the contract, there is the possibility that he had  buy something else from us for the same amount or we will administer penalties for cancellation, he chose the second option so our lawyer has drafted a Memorandum of Understanding that was discussed, agreed and signed by both parties. The same day we receive the signed protocol, we have returned him the difference of funds .. (More than 200 000 euro) ➁

From the day he received his money he started to threaten us with death: His friends Yugoslav, again his Russian friends … his Chinese team … I could go and the best

He contacted the Chamber of Commerce in Hong Kong argue that we have cheated, obviously he say what he want, we receive a request for an explanation of the HKTDC (Chamber of Commerce Hong Kong ) to which we respond and they declare the file closed without further action because we were in our absolute right and advises us to put him in justice.

Several months pass and we hear no more of this madman, apart from the fact that he did spend some time of new threats that we ignore and we avoid responding because it is our view that ‘t was worth the trouble .

Now since we are obliged to respond to wishful thinking on Mr. Aknin I will have to provide elements that will make people who are not responsible in legal trouble. funds of the company based in Geneva: NMPI SA belong to: Mr. Vincent DESMET – VETERINARY, 33 Grande Rue 45210 FERRIERES Tel: + 33 2 38 96 59 59 to whom Mr Stephane Aknin more than 300.000 Euro has lost in less than 6 months

Mr and Mrs Desmet wanted to invest some of his money out of France, for their own reasons, as they have lost everything and decided to withdraw from society NMPI who has not a cent and will be (if it is not already) become insolvent shortly.

4) Mr Frederic Malagrida: (client put us in contact with the crank of Aknin): stephiaproduc@wanadoo.fr

Individuals 1 and 4 no longer wish to never hear from Stephane Aknin, M. Goudmant said the day Mr Aknin will propose him a real deal he will see if he accept. Mr Dedxxx only want a thing is that society SMPI close to no more hear of Stephane Aknin. We are in contact  and friendly relation with all people and all have advised us to put Mr Aknin to justice.

Series of questions and our answers :

Why not be answered before:

Simply because, we believe that this guy has more need of a good psychiatrist than a lawyer (that he has not to our knowledge) and put aside the fact that we have much work, we thought he went by himself to calm down.

What makes Mr. Aknin so nervous:

Simply he has not a cent, and he learned that we had sold 18 millions masks for flu H1N1/H1N5 when he has at the same time the greatest difficulty to sell anything.

Why Mr. Aknin have really canceled the order:

I let you read the note ➂ footer is edifying and i let you judge who is what.

If we were crooks on the run or we hide why do we always have the same phone numbers and same address for 7 years and we are legally registered in all jurisdictions of Hong Kong, China, Singapore.

How is it that no counsel instructed by Mr Aknin have never contacted us after almost 3 years:

Simply because, apart from the fact that he doesn’t the first penny to pay the lawyer fee. Any lawyer who  will be consulted or consult the file say: Mr Aknin you are wrong and we can not do anything for you.

Why in the rantings of Mr Aknin he do not speak about the protocol it signed, and about the fund we return him.??

What happens next now, a series of complaints will be filed against this madman and a lot of innocents people will have to answer to questions not very pleasant to justice.

In 23 years of trade is the first and hopefully the last time I had to go to court for commercial reasons with a client. While for many people to work with China seems dangerous, reading this article you may find that the reverse also true there are in every village in France and in the world one or two idiots who dream of being a success international businessman but which sadly never will have and the intellectual possibilities.

After having a long conversation over the phone with  Mr Desmet ➂ we now the real reason for canceling the order, I can said I was too stupid to take such pity of this madman and not have filed a series of earlier complaints against him. But better late than never, justice will take its short and I would mercilessly regardless of the amount of attorneys’ fees and energy it will take me.

Hoping to satisfy your curiosity (natural) kind regards from Asia

PS: Regarding other possible wishful thinking on this freak, I prefer not even to respond as we are the kindergarten age.

➀ normally the client requests a sample, review it and places his order a few days after

➁ This business operation and all are filled in our annual accounting, and fully register in the Administration of Hong-Kong

➂ After talking with Mr. Desmet yesterday afternoon we now know the real reason for the cancellation of the order. Mr Aknin realized it could not import the iPhone in Europe, but he was careful to don’t tell us, and even 3 years after he was careful to say and says we are crooks. I leave reader to judge by themselves which is which.